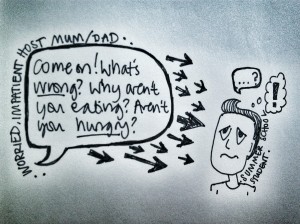 You’re a 13-year-old school student. You’re away from your home and your family. How do you tell your host family that you don’t like the food? Perhaps your teacher can help you work it out with this Forum Theatre style activity.

I had intended to have written about this and more by now, but I threw myself off a bike and broke my arm. It’s almost back to normal now, even if the young scallywag Guillermo did grab it and pull it towards himself for a closer look the day after the plaster came off.

Whilst working at a lovely summer school last month, I had the opportunity to attend a talk, or “playshop” for teachers organised by DDOSA, the Devon Directors of Studies Association. David Heathfield‘s Storytelling And Improvising: Creativity At Play was fun, made me think about how the brain takes in new information and new language, and provided some interesting ideas to use in class. One of the ideas was an activity based on Forum Theatre in which students negotiate how best to navigate difficult situations – perfect for summer school students! I read up a bit more on Forum Theatre* and tried it out with my class a couple of days later.

I chose to try this out on a Friday morning, after the 12 to 14-year-old students had had all week to get to know each other and feel hopefully comfortable as a class group.  (It’s important that the participants feel safe in the group, as anyone who has tried improv comedy will know.) We pushed the tables back and set up the chairs in a circle, to highlight the democratic and spontaneous nature of the class.  This is what followed:

David suggested that Forum Theatre could be used in all contexts with all ages and levels. Through improvising relevant situations, students practise “authentic communication”, building fluency and confidence. They also get to play out a few ideas to find good strategies to cope with the situation well. The content comes straight from the students, so there’s a good chance that they’ll all be engaged.  It could have been more successful with my class – I’m not sure there was a high enough level of trust in the group to allow everyone to feel comfortable performing in front of everyone, but I will definitely try it again, perhaps building up to it more gently next time.

Have you tried Forum Theatre in class? I’d love to know how it went with your age group, level or teaching context. Let me know in the comments below!

*Forum Theatre was created by Augusto Boal as part of the Theatre of the Oppressed. If you’re into Freire, you might be into this.

** If you buy something after following this link, I get a small commission. Thanks! 🙂

Join 637 other followers
Follow A Hive of Activities on WordPress.com

These are the bees knees