Have Something Done – a Lesson plan 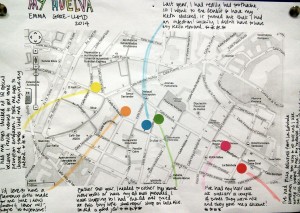 I recently applied for the DELTA course, and one of the tasks was to write a B2 level lesson plan for the language point have something done. I’ve always found this one a difficult one to teach, especially with teenagers, because most of the activities I’ve come across in books are about doing up your house which isn’t as big a thing here in Spain as it is at home in the UK and it certainly isn’t something that my teenage students think much about. I initially toyed with the idea of ‘pimp’ing a classroom, but as this language point was coming up in our FCE coursebook in a chapter on fashion, I decided to stick with the idea of fashion and shopping and base the lesson on things you have had done or want to have done at various places around our city. (I may well have been influenced by the Penny Lane picture, which I think might be from an English File book.) The final productive activity was labelling a map of the centre of city with personal (or invented) anecdotes about the place and the service you had performed for you there. You can see my model in the picture above.

This is what we did:

1. Speculation and vocab. I showed the students some photos I had taken of shops in our city, Huelva. The pictures were rather obscure and the students had to speculate with their partner to guess where it was in the city and what it was. 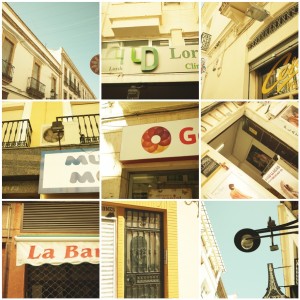 (They are: a nail salon, a dentist’s, a hairdresser’s, a mobile phone accessory shop [the kind of place you can get your phone unlocked], an optician’s, a photographer’s studio, a pizza restaurant, a shoe repair shop/cobbler’s, and a jeweller’s)

[NB. you can argue about whether teaching is a service or not, but a school shouldn’t be on the list. In all the other places, you pay someone to perform a service on a physical object for you, (ie. instead of you) – You can’t have your English learnt for you, unless you transplant your brain to someone else’s head and they go to your lesson instead of you. Well, not yet, anyway.]

3. Looking at a couple of places from our vocab list on the board, we talked about the different services you can pay someone to do there. Then the students in pairs do the same with the other places on the board. Monitor well at this point – there was a fair bit of vocabulary that they wanted to check.

4. Quiz time! Each pair chooses a shop type as team name, eg. Optician’s or Hairdresser’s. This is their buzzer – if they know the answer to the question, they call out their team name first. I then asked a series of questions such as “Where can I have my hair dyed?”, all using the target structure, and gave points to the first team who got it right. The students had been worked hard so far and this seemed to provide some light relief as well as consolidate what they had just done.

The quiz I used, along with an example of the gapfill below and the answers, is here: have something done – huelva

5. Form and Pronunciation.  After we had congratulated the winner, I asked the students to repeat to me one of the questions I had asked. How fast they get it tells you who already knows what! I wrote it on the board and asked what language structure we were looking at – have + object + past participle. Some students might ask about using get instead of have and if they don’t I recommend bringing it up. None of my students knew the difference – simply that get is more informal. At this point, I would also advise eliciting what the structure is used for.  Then you can launch into some pron. Regarding the past participles, I checked with my students that they knew the rules for the pronunciation of -ed, and what I should have done but forgot to do, was spend some time looking at the sentence stress: Where can I have my EYES tested?

6. Controlled Practice.  I prepared my favourite type of gapfill handout, where the gapfills are all questions. If time is short, have half the class complete one half of the questions, and the other half the other. have sth done gapfill

8. Freer practice – Writing. I showed the students my map and asked them to make one about their experiences. They can write whatever they like about the experience as long as it includes the target structure once in each little blurb. If they find they don’t have much to say, suggest they write about things they would like to have done (and why, and why they haven’t yet, or can’t and so on), or they could invent a character who has lots of things done.

[In case you’re wondering, I had my interview yesterday and I’m doing the DELTA intensive course in Seville this autumn!]

Join 638 other followers
Follow A Hive of Activities on WordPress.com